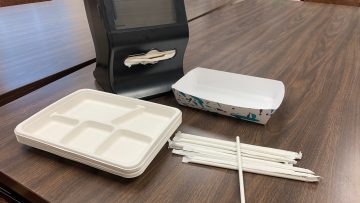 North Hills School District has made some environmentally friendly improvements in the cafeteria. The district has replaced all Styrofoam trays with compostable ones as part of its ongoing initiative to work toward a greener school environment. The molded fiber trays have five compartments, just like their polystyrene counterparts, and are about the same size.

“I’m very happy with the design too,” said Lindsay Radzvin, the district’s director of food service. “It is a sturdy and smart design and more on trend with what our students see when dining out.”

The trays, part of Pactiv’s EarthChoice line, will primarily be used in the district’s four elementary schools and middle school. EarthChoice products meet the criteria of at least one of the four Rs: reduce, reuse, recycle and renew, and over 85% of products are made in the United States.

At the high school, the district has added compostable paper boats. At all buildings, paper straws have replaced plastic ones, and new napkin dispensers hold new compostable napkins. The dispensers are more modern than the ones used in years past, and have a compartment that can hold flyers.

Radzvin worked closely with the high school’s environmental club to implement the changes which followed a pilot program at the high school to replace plastic straws with paper ones.

“We received a very positive response,” said Radzvin. “Our students are becoming more environmentally conscious and we need to demonstrate the importance that each of us have in taking care of the Earth.”

The compostable trays are more expensive but the district hopes to encourage students to reduce consumption too by only using one utensil during meals, one to two napkins, and only one straw or no straw at all to reduce costs.

Radzvin said the environmental club is working to create a video and already planning to use the compartments on the new napkin dispensers to display flyers to promote the district’s ongoing sustainability initiatives.