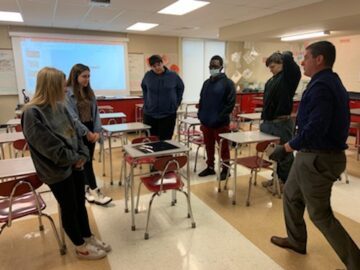 Bellefonte Area High School students had the chance to tap into the minds of crime scene investigators and learn firsthand some of the important aspects of collecting evidence. It was all part of a lesson in teacher Arimani Davy’s current science trends class that welcomed two state college police detectives to class to learn more about their work.

Davy, high school environment and ecology teacher, said her class has been learning about forensic science that was focused on the analysis of evidence such as fingerprints, blood splatter, bite marks DNA and more. Joined by detectives Nick Raia and Craig Ripka, they worked with students to explain how they use and collect various pieces of evidence in the real world to solve crimes. Both are also the fathers of students at the school.

“The presentation was awesome, and the kids really enjoyed it,” Davy said. “They talked to the kids about their experiences in the law enforcement industry – specifically about collecting and analyzing evidence from crime scenes.”

Some information presented included evidence involving fingerprints, blood samples, footprints, weaponry and more. They also discussed that the first – and one of the most important things – to do is take photographs of the scene from various angles that help track details of the scene and can be used for many years later, if needed.

Demos also included a makeshift fingerprint fume chamber made from a CD container. They used water and superglue to create a print on the items they were analyzing, and then used power to lift the print. They also collected shoe prints from the floor using electricity to suction mylar paper to the ground, and used a bloodstain reagent to see blood in the dark.