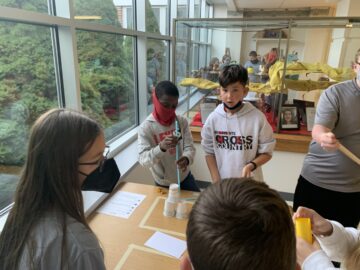 Destination Imagination teams from Bellefonte Area Middle School have been working since the start of the school year to prepare for a competition in the spring that could take them back to the global finals for the second time in two school years. After all, the 14 students that make the two teams, are riding on motivation from a fourth-place finish in June and aiming to improve along the way by working on projects that can set them up for success. Destination Imagination is a project-based program that offers STEAM-based challenges to students in kindergarten through 12th grade. STEAM stands for science, technology, engineering, arts and math.

The teams have until the day of competition to create a solution for one of six challenges they select to present. An instant challenge makes up for 25 percent of a team’s score. One project, called “Daring Escape,” requires the team to participate in a technical challenge to build three devices and create hazards. Through the presentation, the devices must overcome obstacles, while also adhering to a set of restrictions. The other project, called “Tricky Tales,” is a fine arts challenge that allows the students to tell the story of a trickster using technical elements to decide whether or not the trickster overcomes an obstacle. It must also include a costume transformation and illusion to enhance the story. As for the instant challenge, the students have no idea just what it will consist of.

On Nov. 11, the group met after school to work on an instant challenge that encouraged them to improvise through a project without knowing the idea more than a couple minutes before the timer started. In this case, the two teams were asked to build freestanding towers using items such as index cards, mailing labels, paperclips, paper cups, pipe cleaners, rubber bands, sheets of paper and straws. It was even suggested against using the same material for each tower, which afforded them more points.

Seventh-grader Daniel Olamoyegun, said his team worked together by stacking cups and using rubber bands to hold together other items for a tower that was more than 30 inches high. He added that while one part of his team was working on the first tower idea, other student members of his team were brainstorming ideas for the second tower.

Destination Imagination teams meet every after school at the middle school library and review an extensive set of rules before delving into their projects. After the new year, the group will meet twice a week leading up to the competition. There is also a team of three students at Bellefonte Area High School with science teacher Drew Eddinger.