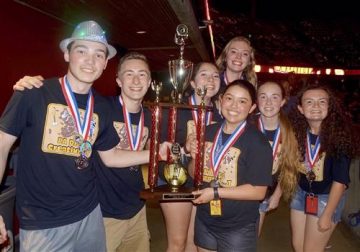 A Delaware Valley High School (DVHS) team placed second in the Odyssey of the Mind 2018 World Finals – the best-ever finish for Delaware Valley School District in 35 years of participation in the annual, creative problem-solving competition.

In the world finals, teams that capture a first, second or third place finish receive trophies presented to them on a stage during awards ceremonies held in large, packed arenas. Teams that finish in fourth, fifth or sixth places also are announced and stand to be recognized during the ceremonies.

DVSD started competing in Odyssey of the Mind in 1983 with one team. The program in the district has grown over the decades, both in participation and success.

This year, the seven teams from DVSD that advanced to the 39th annual international contest held May 23-26, 2018, at Iowa State University in Ames were the most from any school district in Pennsylvania.

These seven DVSD teams had moved on from both the Pennsylvania Odyssey of the Mind northeast regional tournament in March and the state championships in April. Starting last fall, the DVSD students worked for months on solving their problems and creating and honing their performances.

A K-12 extracurricular program, Odyssey of the Mind is a team-based, creative, problem-solving competition. Five problem categories include technical, vehicle, structure, performance and classics. Each category has three divisions: elementary, middle and high school. Student teams, typically each with seven members, work together to accomplish certain tasks and solve specific problems, all done within the context of a skit and an 8-minute time limit. Teams of adult judges score the performances on various factors, including whether tasks are successfully completed and the creativity in devising and executing solutions.

Another scoring element, called “spontaneous,” occurs separately and distinctly from the performance skit. This spontaneous portion judges how well students can think on their feet to solve hands-on problems given to them on-the-spot, without any advance notice or preparation.

Pennsylvania Odyssey of the Mind has six regions: Northeast, Southeast, East Central, North Central, West Central and Western. Of the 178 teams that competed in the state championships, 33 moved on to the world finals.