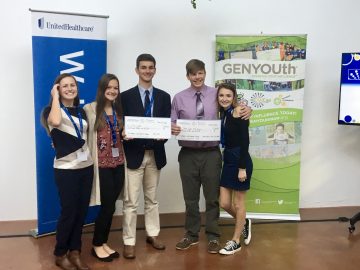 Deer Lakes High School recently sent two student teams to participate in the AdVenture Capital Innovation Challenge at the Energy Innovation Center in downtown Pittsburgh and the teams each came away with $1,000 for their ideas.

The competition was modeled after the hit television show, “Shark Tank” and featured a panel of local judges, including former Steelers quarterback, Charlie Batch from the Best of the Batch Foundation. The American Dairy Association North East and the National Football League’s Fuel Up to Play 60 program also served as sponsors for the event.

The Deer Lakes trio of Jacob Kozlowski, Kelli Galbraith and Amanda Shaginaw had the idea of partnering with area farms to teach young students how to tend the land. Not to be outdone, the tandem of Pietro Porco and Mary Frank pitched the idea of developing a way for students to use their personal learning devices to customize and pre-order their daily school lunch.

Deer Lakes assistant superintendent, Bobbi-Ann Barnes, who chaperoned the group along with food services director Joe Beaman, was impressed by the entire event. “The student teams were all so impressive,” said Barnes. “Most of the concepts were practical and achievable and the students who presented them were incredibly poised and articulate.”

Barnes was also impressed by how well the event itself was organized. “The entire workshop was just outstanding for our students and helped them focus on not only social entrepreneurship but also on the importance of developing the soft skills they’re going to need in their professional careers; like how to network, and the importance of making eye contact and a good firm handshake,” she said.

The competition included more than 60 students from 15 area schools including Quaker Valley, Ambridge Area, Pine Richland, Kiski Prep and Kiski Area among others.