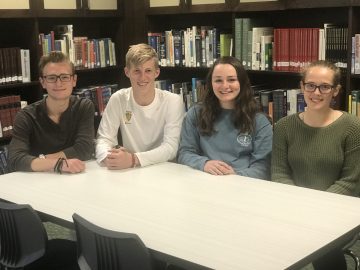 Four Deer Lakes High School students earned the 2018 Advanced Placement Scholar Award. The AP Scholar Awards are presented by the College Board to recognize students who have demonstrated college-level achievement through taking AP courses and exams while in high school.

In the past, of the more than two million students worldwide who took AP Exams, approximately 20 percent performed at a sufficiently high level to also earn an AP Scholar Award.

The College Board recognizes several levels of achievement based on students’ performance on AP Exams.

Also, senior James Riley qualified this year for the AP Scholar with Distinction Award. He did this by earning an average score of at least 3.5 on all AP Exams taken, and scores of 3 or higher on all six of his AP exams.

The AP Scholar Award is earned by completing three or more AP Exams with scores of 3 or higher. In addition to Riley, seniors Jesse Greyshock, Jennifer Rakowski and Katrina Taliani also earned that award.