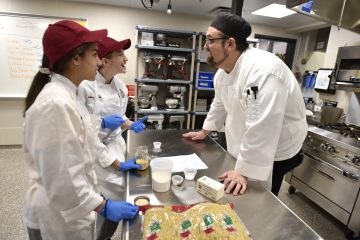 From the bacon-infused aroma the collard greens seemed ready, but Chef Zach Lorber wasn’t convinced. Lorber, or “Chef” as his culinary arts students call him, asked ninth-grader Biannca Poulson for her opinion. More lemon juice and hot sauce, she said after nibbling a sample. Lorber nodded in agreement, and at that moment, Poulson tasted something else: empowerment.

As the new instructor of the State College Area High School Career and Technical Center culinary arts program, Lorber seeks to blend confidence with knowledge and create a recipe for future success in the foodservice industry. “The goal is to get students ready to enter the workforce,” Lorber said.

Students embark on that path by donning starched jackets in a gleaming kitchen that would be the pride of many commercial establishments. During classes, Lorber moves among stations, keeping a watchful eye. Formerly a university executive chef, he brings 17 years of experience to the job, as well as a rare credential: He’s one of 3,500 executive chefs nationwide certified by the American Culinary Federation. But that doesn’t mean he’s dictatorial. On his second day, he brainstormed with classes for desired techniques, recipes and field trips. He also strives to inspire creativity and curiosity, as when he encouraged a student’s Latvian-French fusion potato dish. “Cooking is very experiential,” Lorber said. “You can watch a cooking show, you can read a cookbook, but you don’t learn until you do it. So my goal is to get the kids deep into it.”

Safety, sanitation and professionalism all matter too, but now, he must season his direction for young neophytes. While cooking is always serious business, there’s more room for light-heartedness these days. A dash of humor sweetens a critique, making it easier to swallow for a freshman painting butter on garlic cheddar drop biscuits. “All right, Van Gogh, let’s be quicker,” Lorber said, swapping grins.