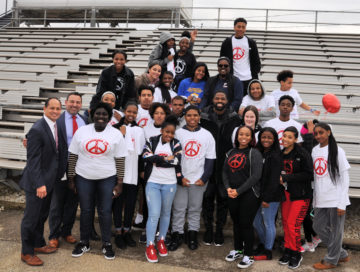 The students, teachers and administrators of Plymouth Whitemarsh High School (PW) joined together for a Unity Walk on February 26. The group circled the Colonial Field track and gathered near midfield for a special message from guest speaker Torrey Smith of the Philadelphia Eagles. “We’ve had a theme that’s continuous from last year, and that is Unity,” explained PW Senior Phylicia White, president of the school’s Black Cultural Awareness (BCA) Club, who organized the event along with Emma Williams, BCA vice president. “Everyone is going through their own things, tragedies, bullying, racism and stereotypes. We decided to show we have unification in PW and have this walk.” The Philadelphia Eagles wide receiver pointed out some of the difficulties that high school students face today and spoke of the different personalities, cultural difference and beliefs among players who all came together to win the Super Bowl. “We live in a climate right now where everyone tries to choose sides,” said Smith. “It’s okay to be different. But you need to respect one another and be united to be better.” In addition to spreading a message of unity, the BCA organized the event in honor of Black History Month.