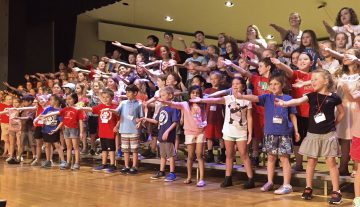 More than 100 children in first through sixth grade joined their voices for the annual Singfest, a choral camp run by the Colonial School District music department during the first week of summer vacation. “I like that we sing and dance and collaborate in a group with people who are from all around the community and the school district,” said Alyssa Avery, a Colonial Elementary fifth grader who also attended the camp in the past. “Music is like a language, and it’s important to learn and share it with other people.” In addition to music teachers from three of the schools, several Colonial Middle School (CMS) and Plymouth Whitemarsh High School (PWHS) students work with the younger students in small groups during the week to learn songs and create dance moves. The week-long camp ended with a concert attended by friends and family in the Colonial Middle School auditorium.