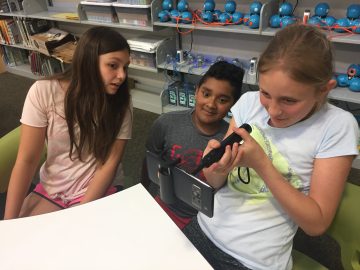 At Colonial Elementary School and Colonial Middle School, teachers were offered the opportunity to enhance what the students were learning in their classes using augmented reality. That meant fifth-graders studying the solar system could take a close up look at different planets, CMS students learning French could visit different French-speaking countries and seventh-graders could experience how armor evolved from the ancient Greeks to the ancient Romans — through an app on a phone. “You can basically look at something from different angles, and it seemed to be there,” said Sebastian Krolak, a sixth grade student at CMS, who used augmented reality to explore French Impressionist paintings. “You see it in 3D and get to interact with it, so we could zoom in to see dots and wisps of paint.”

The Google Expeditions Augmented Reality is a stepping stone to their Virtual Reality product that has been a popular teaching tool at CMS. “In addition to curating physical paper resources, I’m also looking for effective digital resources, and virtual reality has been an exciting way to immerse students into a lesson,” said CMS Library Media Specialist Brooke Carpenter. “In the year or so since we’ve adopted the virtual reality goggles, the amount of content available has grown exponentially. We’ve had to purchase more sets so more teachers can use them.” The phone reads a QR code-like image that brings up graphics and animations that students can explore. The new augmented reality product is a way to give students a similar experience without the total immersion of virtual reality, which is not recommended for students under age 12.