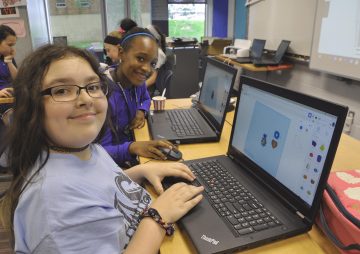 Colonial School District’s Girls In Technology Academy gives girls in fifth through eighth grade the opportunity to explore robots, 3D modeling and engineering. Part of Colonial’s STEAM (Science, Technology, Engineering, Art and Mathematics) culture, the four-day summer camp encourages the girls to work together to solve problems and create new things. The projects at the Girls In Technology Academy this year include: using 3D modeling software to design and print jewelry, programming robots and working in teams to build “Rube Goldberg” machines — elaborate contraptions with a variety of slopes, pulleys, tubes, levers and found objects — that perform a relatively simple task. For the Girls In Technology campers, the machine needed to erase a word from a whiteboard.

Behind all of these projects is a foundation in the engineering design process. The engineering design process includes: identifying a problem, exploring resources, designing a solution, creating the solution, testing it and making it better. However, the ultimate goal of the camp is to encourage girls to stay involved in technology through high school and consider STEAM careers in the future. The Girls In Technology Academy summer camp in the Colonial School District is funded in part by a grant from The Quaker Chemical Foundation.​