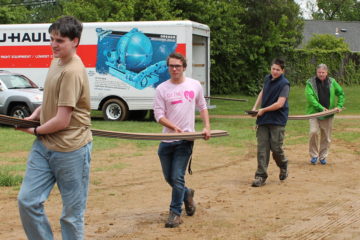 Jordan Santoli, second from left, led a group of scouts in building the outdoor classroom as part of the requirements for him to receive the Eagle Scout honor.

For students at Whitemarsh Elementary School, a formerly unused courtyard has been transformed into an outdoor classroom thanks to the WES Parent Teacher Organization and Eagle Scout Jordan Santoli. “This was my elementary school. I have fond memories of my time here,” said Santoli, a 2017 graduate who is now studying software engineering at Drexel University. “It’s good to be able to give back to the people who’ve helped me along the way.” Santoli led a team of close to 25 Boy Scouts who spent approximately 250 man hours renovating the space. They built tiered benches for “stadium seating” along two brick walls and turned industrial electrical spools into brightly colored tables with stools. “The spools were going to get thrown into a landfill, but we were able to bring them here and make something great with them,” the scout said. The project was one of the requirements for Santoli to earn his Eagle Scout rank, the highest achievement attainable in the Boy Scouting program. WES Principal Donna Drizin noted that the outdoor classroom will be used to host shared reading and social studies lessons, as well as science experiments that involve nature and the environment. WES officially opened the outdoor classroom at a ribbon-cutting ceremony held on October 30.