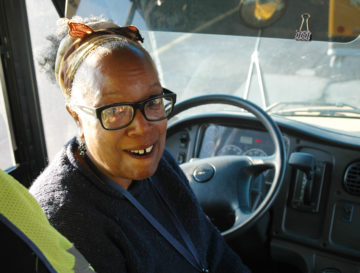 School bus driver Terry Mansfield often parks her bus on a side street during the layover between taking students to one of the private schools and beginning her route for Plymouth Elementary School. On a recent December morning, Ms. Mansfield was waiting when she saw something that didn’t seem right — an older woman outside in her robe and slippers.

“It’s cold out. She came over to the bus and sounded so confused,” said Ms. Mansfield. “I was so worried.”

Ms. Mansfield got off the bus and chatted with the woman. Through the conversation, she figured out where the woman lived and walked her home. Finding no one there, Mrs. Mansfield called the police so the woman wouldn’t be left alone. Then she returned to the bus to start her run.

“I feel a part of the community,” she added. “I let people out who are backing out of their driveways. I leave a little extra room next to people walking their dogs. I have their kids on this bus — and I had their kids who are now in college. We’re all in this together.”

A donation came to the Colonial School District Education Foundation in honor of “whoever the school bus driver was on 12/12/17 that picked up my grandmother (who has dementia) and took her home safely.” That note started the search that uncovered Mansfield’s good deed.