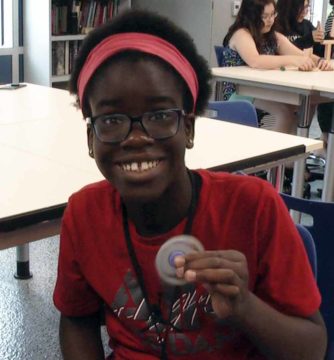 Fidget spinners may have been banned in many schools, but they were a hit at the Girls in Technology summer academy, where girls from fifth through eighth grades worked with basic 3D modeling software and printers to build their own fidget spinners. Designs included everything from geometric shapes to animals like cats and dogs. “They’re really unique and most people think it’s really hard to make, but it’s actually easier than they might think,” explained Sanaa, a rising sixth-grader. The fidget spinner project was just one lesson from the two-week camp, where the girls also learned how to make speakers, soldered circuits, programmed robots and took part in activities with female role models from Drexel University and Dow Chemical Company.