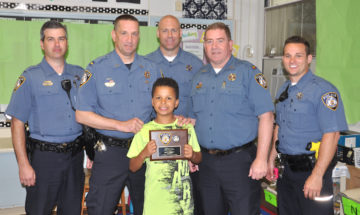 While it’s not uncommon for Whitemarsh Police officers to visit Whitemarsh schools to speak with children about safety and other issues, a recent trip was special. Chief Christopher Ward and several officers came to school to present student Kellan Roberts with a Good Citizen Award. The award arose after officers responded to a fight on a school bus, and learned that while others watched, Kellan had stepped between the two combatants to calm the situation. “It’s important to remind students of all ages that there are bullies and people who make bad choices,” said Chief Ward. “It’s equally important that we teach the students not to be bystanders, but to tell an adult and take appropriate action when they see behavior they know is not right.” Chief Ward added that if Kellan was an adult he would have been recognized at a township supervisor’s meeting. “We thought it would be more meaningful to do it here amongst his peers,” the chief said. “We wanted to reinforce the positive behavior with the students and let them know good deeds don’t go unnoticed.”