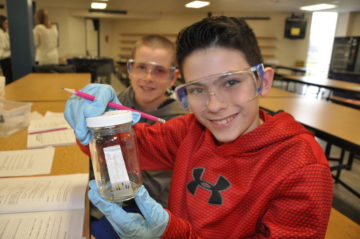 Ricky (front) and Ryan (back) show how chromatography separated the different components of the ink.

Someone kidnapped the school mascot, leaving behind a ransom note, and it was up to sixth-graders at Colonial Middle School to use science to find the culprit. Students took ink samples from the pens of the suspects and compared the samples to the ink on the ransom note using chromatography. When the sixth-graders put the ink samples in ethanol, the black dots developed colorful trails that showed the differences in the ink. “It’s cool to see how the evidence comes together and how you can really figure it out,” said Alexa, a sixth-grader at the school. The project is part of Science In Motion, an initiative created and run by a dozen colleges across the state, that brings scientists and advanced laboratory equipment into Pennsylvania schools. Dr. Kelly Mowery, a chemistry professor from Ursinus College, led the activity at CMS.