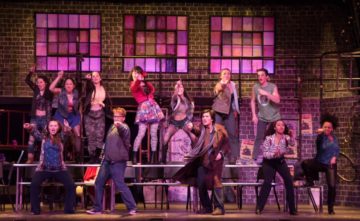 The PWHS Colonial Players celebrated their 40th year with a production the school edition of RENT.

To help prepare the Plymouth Whitemarsh High School students for some of the themes in the spring musical RENT, the school’s Anti-Defamation League (ADL) Peer Trainers, the Gay-Straight Alliance, as well as the cast and crew, ran a program that would allow the other students to preview the musical — while gaining a better perspective on some of the characters.

“It could be quite shocking to see a show with multiple gay characters if you are not exposed to that style of relationship,” said Raquel Dunoff, a senior at PWHS and ADL Peer Trainer, who also wrote and coordinated the program. “By making students more aware of different lifestyles, we can better prepare them for the show — and life after high school.” In the auditorium, students watched performances of songs from the show alternating with video clips from an interview with Jerry Clark, a Philadelphia-area ADL facilitator, who was a high school teacher in New York City during the AIDS epidemic. He also worked as an activist within the LGBTQ community in the late 1980s and early 1990s, during the era that RENT takes place.

During a classroom activity, the ADL Peer Trainers explained how AIDS is caused by the HIV virus and affects more than 1.2 million people in America — including 1 in 8 infected people who are unaware that they have the disease. Then they led the students in three role-playing scenarios: one where an HIV+ high school student was born with the disease and doesn’t want to hide it anymore, one that involved a gay student being bullied at lunch and one where a student decides to come out as transgender.

“As ADL peer trainers, we are reminded that it is important to see others’ perspectives to better empathize with and understand them,” added Dunoff. “If more students are able to take a step back and consider what someone else was thinking or experiencing, this would make PWHS an even more accepting environment.” The Colonial Players performed the school edition of RENT at PWHS in March, selling out three of the four shows.