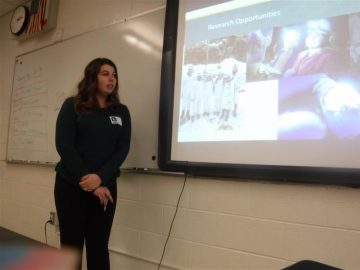 When Sierra Rider was in Andy Caruso’s eighth-grade science class, she didn’t know what her future held professionally. Fast-forward about eight years and she had the opportunity in January to go back to Bellefonte Area Middle School to work with Caruso and Jim Nye’s sciences classes to speak with students about what her biology research included during her undergraduate studies at Lock Haven University. It’s one that took her on a journey across the country.

She was among three students from the university who stopped by the school to interact with the students. The others were Olyvea Welch and fellow Bellefonte Area High School grad Zach Stephens. Welch, a Central Mountain High School alumna, graduated in December with a degree focused on microbiology.

Stephens, a BAHS Class of 2015 alumnus, also plans to graduate from Lock Haven in May with degrees in biology and physics. His research includes general protein studies of molecules responsible for the propagation of prostate cancer and its genesis in fruit flies. His undergraduate research led him on a fellowship at SUNY Upstate Medical University in Syracuse, N.Y., where he hopes to attend a Ph.D. program. He was also accepted at Florida State University.

The eighth-grade science class lesson was spearheaded by Nye as a way to expose students to the types of work scientists are involved in.

“I wanted kids to learn how science is actually done and how research works, as well, and to observe successful Bellefonte graduates involved in scientific studies,” Nye said. “I was able to set this up because of my recent sabbatical at Lock Have University where I earned a (Bachelor of Science) degree in biology and had several classes with the (student) speakers.”

Rider, a member of the Bellefonte Area Class of 2016, graduated in December from Lock Haven with a major in biology and minor in environmental sustainability. She spoke to middle school students about her research that took her to Vermillion, South Dakota for 10 weeks last summer. She said it was funded through a National Science Foundation grant that allowed her to study the impacts of invasive tree species and the breed success of birds that were nesting along the Missouri River.

“Birds like cottonwood trees, but since it is flooding because of the dams, the cottonwoods aren’t able to reproduce, which means they’re dying or too immature to support a bird’s nest,” she said. “The birds are (instead) selecting Russian olive trees, which are really invasive to the state. We looked to see if it provided a better or worse (habitat) for the birds.”

Each year varied, she said.

Rider also said she conducted other undergraduate research on the impacts of an unused reservoir on brook trout populations in Harveys Run in Castanea, Clinton County. There, she said, is a dam with two tributaries that feed into it. Rider’s work looked at temperatures of the water with stats collected every hour of every day from the two tributaries.

“It’s important,” she said. “For what I do, it’s ecology based, and with all the stuff about climate change, it’s important to understand what we’re doing and how we can reverse or how we can find alternative means to fix what we’re doing. It’s a chain – trophic cascade. When you take something out of the food change that can affect everything else.”