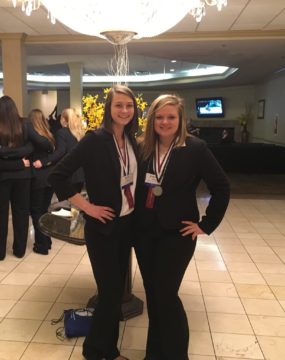 Two Allied Health Science students from the Clarion County Career Center placed in the top three in their respective competitions at the HOSA State Leadership Conference held in Lancaster on March 8-10, 2017. The results qualify them to participate in the HOSA International Leadership Conference which will be held in Orlando, FL in June. HOSA is an international student organization for health science education.

Amanda Booher, who is a senior at Allegheny-Clarion Valley High School, placed second in Nursing Assisting. She also competed last year and placed third in this same state competition and attended the 2016 international conference, which was held in Nashville, TN. Booher achieved 10th place against students from the United States and other countries. Becca Smith, a junior at Keystone High School, placed third in Medical Terminology. There were a total of six Allied Health students who participated in the state conference.