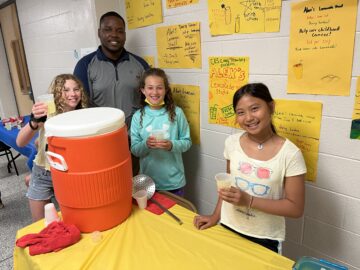 At Colonial Elementary School, the hallway outside the cafeteria was a sea of yellow, with yellow posters papering the walls, tables covered in yellow, and students in yellow shirts pouring and handing out lemonade just about as fast as they could — all in an effort to raise money for Alex’s Lemonade Stand.

Nearly 100 students volunteered for the event through the club CES Cares. There were two meetings to plan the stands, record commercials and make signs. When the big day arrived, the children gave up their recess time to make and sell the lemonade during lunches.

“Being a part of this shows how you care,” said fifth grader Taylor Peng.

“It makes me feel really good that we can make a difference for kids with cancer,” added Abby.

During most school years, this would be the final project of the year, but Alex’s Lemonade Stand was actually the first for the club in the 2021-22 school year.

“We’ve had to take a break from CES Cares due to COVID, but since things have opened up a little bit, we wanted to end the year by introducing our fourth and fifth graders to what CES Cares is about,” said Michele Yavorski, who advised the club along with teachers Emily Rosenfeld and Ken Grimes. “Hopefully we’ll be able to get started right away in September next year.”