McConnellsburg seniors plan for the future 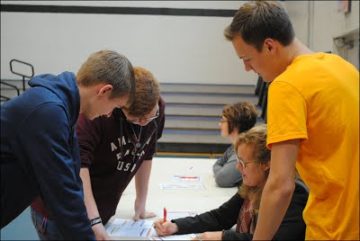 McConnellsburg High School seniors got hands-on experience creating a budget, choosing an occupation and managing expenses at the school’s Reality Fair, sponsored by a local credit union. Students considered life decisions such as vehicle insurance and housing, and other expenses such as cell phones, clothing, eating out and more. About a dozen community volunteers represented stations dedicated to various expenses. As the students moved through the areas, they calculated how much of their budget they would allot to each one and how much to save. According to an article on the school’s website, students were surprised by the prices of items, but were engaged in the activity.