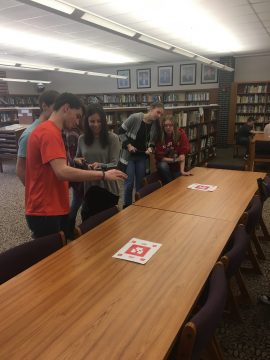 In February, Google Expeditions visited Central Cambria SD High School and Middle School to pilot an unreleased app called Augmented Reality. The visits were a part of the company’s effort to get feedback from teachers and students at schools nationwide to help improve the app before it is released to the general public. According to an article on the district’s website, approximately 500 students participated in the program. The students used phones provided by Google to bring various 3D objects to life. They studied items such as dinosaurs, Roman sculptures, the solar system, the cardiovascular system, and WWI and WWII artifacts. All the students had to do was open the app, point to a QR code and start exploring the 3D object that appeared in front of them. Teachers guided the students through each lesson, giving facts about the objects and connecting them to material from the curriculum.