Celebrating the 100th day of school 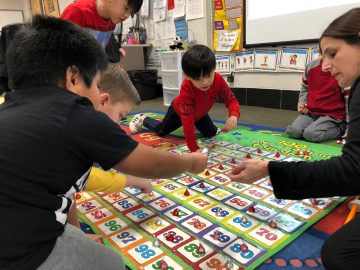 In the Colonial School District, being in school for 100 days is a big deal, especially for kindergarten and first grade students.

“It’s the 100th day of school,” said Ridge Park Elementary School (RP) kindergartner Mila Lichtenstein. “That means we get to do special activities for 100. I’m counting by tens to 100.”

In classrooms across the District, kindergarten and first grade students cycled through different stations where they grouped items — like dice, buttons and rubber bands — by tens to make 100, stacked 100 cups, made sculptures with 100 legos and even worked the number into other disciplines like Art and English Language Arts.

“I wrote that I would like 100 LOLs, and I wouldn’t like 100 snakes,” said RP kindergartner Annmarie Alderfer.

While most of the activities involved students working independently, some projects included the entire class. In Rachel Handis’s room at Plymouth Elementary School (PE), she hid 100 pieces of candy that were labeled 1-100.

“My favorite activity today was finding the 100 Hershey kisses,” said PE kindergartner Magnolia Lick. “I liked looking for them and putting them on the chart.”

“We like to say that they’re 100 days smarter,” said Ridge Park Elementary teacher Sarah Guckavan. “There’s a lot more that they can do now than they could at the beginning of the year. They can write their letters. They’re grasping what 100 means in groups of 10s.”

Because the kindergartners start a little later than the rest of the school, the first grade and kindergarten classes held their celebrations a week apart.