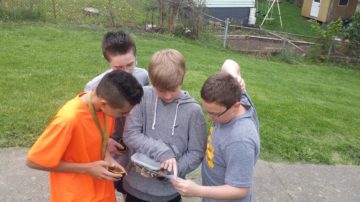 Canonsburg Middle School is one of 38 middle schools in Pennsylvania that have been named Don Eichhorn “Schools to Watch.” This is the third time in nine years that the school has been nationally designated as part of the recognition program developed by the National Forum to Accelerate Middle-Grades Reform. The school is among a select group of ten schools in the state that have been re-designated. Unlike the Blue Ribbon recognition program, “Schools to Watch” (STW) requires schools to not just identify strengths, but to also focus on areas for continuous improvement, thus, the three-year re-designation. Canonsburg Middle School Principal Greg Taranto said he is proud of his staff. “This is a big deal,” he said. “This is a true reflection of the work and dedication we put into the school with an absolute focus on best practices for middle school students.” Canon-McMillan School District (CMSD) Superintendent Michael Daniels said the designation is “a reflection of the high quality administrative leadership, the collaborative efforts of an excellent team of teachers who provide for the delivery of effective instruction and the overall performance of our hard-working students.” CMSD School Board President Manuel Pihakis agreed: “We’ve always known that our Canonsburg Middle School — as well as its administration and staff — are among the best of the best, and now the whole country knows it.” The school will be recognized nationally with all the other recognized STW schools across the country in Washington, D.C., at the National Forum’s National Schools to Watch conference on June 22-24. A celebration at the middle school — which will be attended by both state officials and local dignitaries — will also take place in the spring.