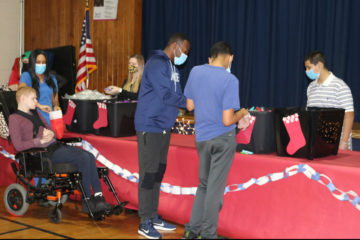 This event has grown from one classroom helping to do 100 stockings to five years later encompassing every student in the school to help. Everyone participates!

In the midst of a pandemic, with schools trying to operate normally while dealing with changing health guidelines and schedule modifications, the students of the Bucks County Intermediate Unit (Bucks IU) at Samuel Everitt were determined to persevere and still hold their fifth annual Stockings for Soldiers program on Monday, November 30, 2020. Under the direction of Shannon Hamilton, Bucks IU autistic support teacher, this all started with the idea of sending some holiday cheer to her Marine Corps brother who was stationed overseas at the time. Expanding on the idea, Hamilton found a way she could make this a classroom project in support of the educational needs of her students.

Hamilton’s class thought of putting various gift items and cards into stockings to ship overseas to her brother and his fellow service personnel. The project was such a hit that over the next five short years, it expanded to encompass shipping to troops in locations around the globe and requiring the entire school’s participation to support what has become an enormous assembly and distribution effort. From opening boxes and sorting items, keeping a detailed inventory, to counting and bagging candies, and even making a card for every stocking, this project allows every single child in the school to participate in some way. Physical and occupational therapy skills are supported by practicing things such as manual dexterity, mobility, gripping and balance along with soft skills being supported through social interaction and practicing both patience and sharing.

For this fifth anniversary of the Stockings for Soldiers event, 1,400 stockings were completed! With generosity abounding through donations of items and funds from well beyond just Bucks County and Pennsylvania, an additional 25 community boxes of goodies were also packed up for shipping to our troops!

Adaptations for 2020
The pandemic made the logistics of this year’s planning and goal more difficult, but everyone was determined to still make this happen. Students were kept with their own classmates and that class would take 30 minutes to come in to work the assembly line. This year had designated personnel wearing gloves and positioned on the opposite side of the tables, handing the child a stocking and then as the kids went down the line, dropped items in to fill them up. Using the gym and with assembly lines on opposite sides of the room, the bins of items were spaced over six feet apart to support social distancing. Everyone medically capable of wearing a mask did so, hand sanitizer was readily available, and doors were opened for added fresh air circulation whenever possible.

Showing their support
Many local legislators stopped in to show their support for this amazing program and students. Congressman Brian Fitzpatrick not only made a special trip back to Bucks County to show his support, but kindly presented the Bucks IU with a flag that had been flown over the Washington Capital. Also stopping by were Representative Tina Davis and Representative Wendi Thomas. Commissioner Robert Harvie also came by to lend a hand by filling some stockings.

The generosity of many
Through the donation of goods, services, funds, and time, this program is made possible by so many. Fore the Troops is a nonprofit charitable organization that raises money to support philanthropic organizations focused on programs and support of military personnel and their families. The organization has been an avid supporter of this program and once again generously donated $5703.60 to cover all of the shipping costs. Funding was also provided by the Bucks IU Education Foundation which supports educational programs for the students of Bucks County with grants. Their $500 was used towards the purchase of stockings.

Additionally, thanks go out to the Davis Elementary School fifth grade, Girl Scouts Rock United Service Unit (Troops 263, 262, and 2470), Cheryl Cichonski-Urban for collecting donations, Shoprite (Yardley), Giant (multiple donations from locations throughout Bucks County), Redners (Levittown), BJs (Fairless Hills), Sam’s Club (Langhorne), and drop off sites – the Green Parrot and Kiddie Academy. Their support not only helps this program but is a wonderful example of the strength of the Bucks County Community.

The program truly appreciates the military volunteers who came to assist; Gus Cales, sergeant-at-arms for the Patriot Detachment 1230 and Marine Corp League Eagle Scout representative, and Robert Dangler Jr., U.S. Army, staff sergeant (retired). Their presence, in uniform, helps the students to visually connect what they are doing to the intended recipients.

A win-win for both students and troops
This program not only supports student’s educational needs, it also provides emotional support. It is an opportunity for students to give back to others by giving of their time and effort in an expression of sharing and caring. This is a fun, learning, and giving program they look forward to and have become very dedicated to participating in every year. The thank-you notes and acknowledgements from military personnel around the world are cherished and shared with students and staff helping to validate the impact their efforts have made to so many away from home over the holidays.