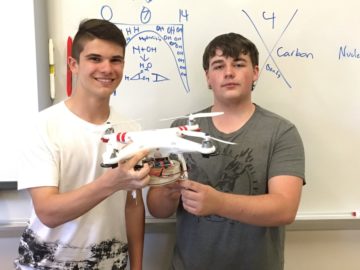 Bradford Area High School in McKean County hosted a regional Sea Air Land (SEaL) Competition, sponsored by Office of Naval Research and promoted by The Pennsylvania State University’s High School STEM Engineering Program. In the competition, contestants from seven school districts in the region worked with teachers and industry mentors for three to four months to design small-scale robotic vehicles and payloads that are solutions to specific challenges in each of the three areas: sea, air and land. They then demonstrated how the machines they built worked at a daylong conference in April. Challenges were designed by engineers at Penn State Electro-Optics Center and by Navy SEALs and Green Berets. This year’s challenges were to develop a submersible to search a sunken UROV for recoverable payload, build a payload for a quadcopter that can release aerial drops onto dangerous forest fires, and build a robot that can deliver supplies to people trapped in a city building after an earthquake. Champions included teams from Otto-Eldred (McKean Co.), Smethport Area (McKean Co.) and St. Marys Area (Elk Co.).