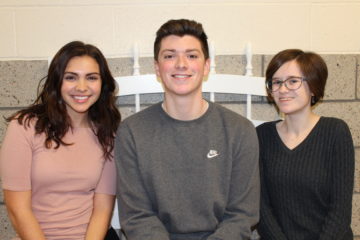 Bethel Park High School students in the Big Data Analytics Class were winners in the Best Use of External Data category in the first-ever Police Data Challenge, sponsored by the American Statistical Association. Winning the competition were Elise Bermudez, Alaina Cerro and Sean Conroy. More than 70 teams from 20 high schools participated in the nationwide contest for high school and college students, which allowed them to demonstrate their statistical and data visualization skills for the purpose of enhancing public safety. For the contest, the Bethel Park students selected the Baltimore Police Department, focusing on a variety of aspects, including the top 10 common crimes, the times of day the crimes were committed, the times of the year where crime was most prevalent and the frequency of specific crimes. Entries were judged by  statisticians, academics and researchers who evaluated the presentations on the basis of quality and data assessment. The students liked that they were working on a real-world problem and hope that the Baltimore Police Department will be able to use their findings to help reduce crime. They also hope that their findings will encourage other police departments to look into data as they determine how to best address crime in their cities.