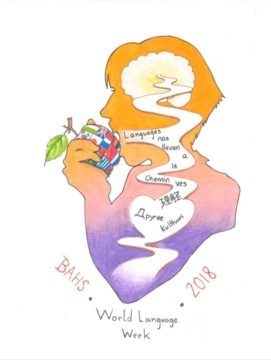 The Bellefonte Area High School languages department and Spanish Honor Society celebrated World Languages Week, also known as National Foreign Language Week, held during the first week of March. This is the fifth year the language department participated in the national celebration, which allowed students in Chinese, French and Spanish classes to learn about a different language other than what’s offered at the school.

Student Gretchen Little said they chose the Swedish language since a student teacher knew some of it from her father who was born in Sweden. High school Spanish teacher Emily Zimdahl-McManus even said a student created an image that was put on T-shirts ordered to help celebrate World Languages Week. Dustin Waltz was the designer of the image that incorporated this year’s national theme, “Languages lead us on a path to understanding other cultures.”

Waltz, a senior, has also taken the three languages the high school offers. “While all the festivities are enjoyable for the students, the Spanish Honor Society loves any opportunity to spread world cultures to the school,” Little said. “It was a great opportunity for the society to learn about these new languages and cultures prevalent in the world. Cultured students help to build a brighter tomorrow, which is what the Spanish Honor Society always strives for.”