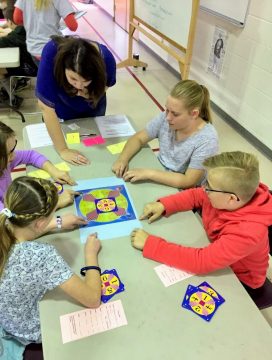 Just because students from Bellefonte Area School District don’t participate in the annual 24 Challenge until the spring, doesn’t mean it doesn’t take most of the school year to prepare.

Students competed at the district math tournament held at Bellefonte Area Middle School. They were eligible to compete at the district level based on results from building tournaments held at each of the district elementary and middle schools. The 24 Challenge is based on the 24 Game that challenges students to create the number 24 by using a series of given numbers.

Winners of the 2019 district tournament

During the 2017-18 school year, math training that also started in the fall paid off for several students who placed in the finals and semifinals of the regional 24 Challenge held at Lock Haven University-Clearfield campus. Each building with student participants held its own building-level tournament. The top eight students from fourth- through sixth-grades qualified for a district tournament at the middle school. From there 35 students then qualified for the regional tournament.