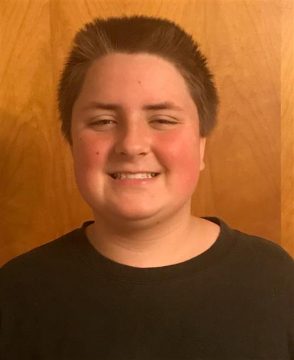 When Daniel Weaver got to writing his book, he tapped into the minds of the characters to tell the story of “Found by Time” that helped create their journey from beginning to end.

“Found by Time” is a book the seventh-grader wrote during the summer of 2019 between his sixth- and seventh-grade years that was recently published by ReadyAimWrite Kids, a branch of the Harrisburg-based company ReadyAimWrite Publishing, owned by author Stephen Kozan.

Calling it a “very interesting story,” Daniel’s experience writing was one he said he wasn’t expecting, but came after Kozan visited BAMS last school year and presented what’s called a Flash Fiction contest to the sixth-grade student body on the Red and White teams. The Flash Fiction contest allows students to submit work to Kozan with the potential of being professionally published based on their ideas. Last school year, more than 100 BAMS students participated.

“In fifth-grade, that’s when Annie did it, but I didn’t because I kind of thought that wasn’t for me,” Daniel, 12, said. “Then last year I was like, ‘you know what? I have a couple ideas that might be cool. I probably won’t get it, but at least I’ll try for it,’ and I did.”

Kozan selected a short story that Daniel wrote as one of the top five finalists. The group was then asked to further expand on their ideas with a 150-word synopsis, and Kozan selected just one as the winning idea with the opportunity for that winner to write and publish a book based on that idea.

Daniel was the winner.

“First of all, when I heard I was in the top 5, I was like, ‘are you sure you got the right person?’” Daniel said with a laugh. “That was amazing. … out of that many people he chose me!”

With help and some direction from sixth-grade English teacher Sam Hubley, Daniel said he began writing the book during the summer – something he explained was “more difficult” than he thought it would be.

“I give so much respect for those people who write hundreds of pages,” he said. “It takes so much effort and time, and when I was writing I thought it was tough, but had a lot of support and just began coming up with ideas as I was typing.”

His goal was to complete two chapters a day until he was completed with the book, and writing in 20-minute increments with 20 minutes breaks in between. He submitted the final draft to Kozan and an editor just before school started in August.

“I was so happy the day I finished – I’ll never forget it,” Daniel said. “I was like, ‘wow, that was really something.’ That was quite a journey because I kept thinking it was summer and I should be relaxing, but knew I had to do this and get it done.”

But despite the obstacles, Daniel said “everything about it” was a great experience.

“The opportunity was a great life moment for me, and just being able to learn all the skills I learned from this with writing and managing time and making deadline was totally worth it,” he said.