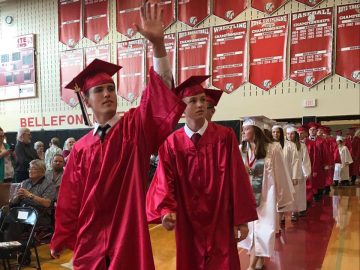 In 1884, Bellefonte hosted its first graduating class with just four students. About 134 years later on the night of June 1, 196 seniors walked the stage as part of the Class of 2018 as their first step toward the next phase of their lives.

“I’m going to miss being around my friends every day,” Jacob Frey said. “My closest friends would walk these halls with me. I’d be with them for seven hours a day – definitely going from seeing them five days a week to none is going to be hard.”

Frey will be attending Penn State’s College of Engineering in the fall to pursue a field of study and eventually a career he’s excited about, thanks to teacher Kevin Harman who Frey said, “instilled the passion of engineering in me.”

Harman was one of the many teachers at BAHS who students said inspired them to be the best students they could be, often calling them more than educators, but also people who they could confide in.

“Mr. Zimmerman the music teacher – him and I had a real good connection these past four years,” Robby Ford said. “He’s really (like) one of my friends.”

Zimmerman is retiring at the end of the school year after 36 years working in the district.

Vogel, graduating with a 100.6101 percent average, said her speech gave the message to “make sure you’re proud of who you are,” she said. It was followed by a message from Knupp, a classmate and close friend, about the changes that will have a positive aspect in life.

“It’s nice to address my classmates and give them hope for the future and that they should embrace the changes before them,” said Knupp, who graduated with a 100.3066 percent average.