Bellefonte bands find a way to entertain despite limitations 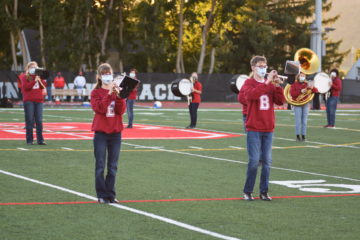 It’s not very often music is arranged specifically for the Bellefonte Area High School marching band that only they have the rights to perform. And this school year, its members have a chance to showcase the tune, which will eventually be part of a show called “Goin’ Down the Bayou” that previews what they hope will be in full swing next school year with a set of New Orleans-style music.

It includes an arrangement of “The Bear Necessities;” “Gonna Take You There,” from Disney’s Princess and the Frog; “The Mandalorian;” and “Centerfold.” “Gonna Take You There” was arranged by local musician Rick Hirsch specifically for the Bellefonte band, making it the only group in the country allowed to play this specific piece for the next three years.

And with a mindset that’s all about showing what the bands can do, rather than what they can’t, band director Caleb Rebarchak and the band program is still able to provide the best entertainment possible despite limitations from the COVID-19 pandemic – it just comes with distancing, face coverings and shorter playing times. What remains the same, however, is the passion the band has to perform and the passion its supporters still have for their musicians.

“It’s different for sure, so we’re looking at it as a way to continue to build skills, while being as safe as possible,” Rebarchak said. “We’re doing the most we can given our limitations, and shifting the focus from thinking what we can’t do, to what we can do. At the end of the day we’re still making music.”

Rebarchak said the marching band began practicing in August, a few weeks later than usual. This came after a study was commissioned by several institutes and organizations about how novel coronavirus could spread through the use of instruments. Research supported that bands and choirs should limit playing and singing time to 30 minutes, which Rebarchak said he follows. It also allows music teachers to work on skills with students, while teaching them music history and theory type lessons in class when they’re not performing.

The high school’s band program consists of concert band, jazz band and marching band. Concert band is curricular, while jazz and marching bands are extracurricular activities. And while there won’t be any formal concerts the public can attend physically this school year, the goal of the music department is to bring something virtual to the community instead.

“What we want to do is some kind of virtual performance where students will be given a piece of music and record it, and we put the pieces together,” Rebarchak said.

As for the marching band, you’ll still see them at games playing their show before the game, instead of at halftime. However, if things change, then they’re set with a backup plan. After all, they worked with the district’s technology department to provide a prerecording of their show conducted on August 13 to play during livestreamed games on YouTube.

“We knew this was going to be a year of unknowns, so we wanted to make sure we had a backup (plan),” Rebarchak said.

You can find the marching band at home football games on the south side of the stadium in the D-Zone behind the goalpost. Unable to wear their usual uniforms, they are instead in matching pants and Bellefonte Marching Band sweatshirts – distanced at least six feet apart and wearing face coverings with slits by the mouth, so students can still play their instruments.