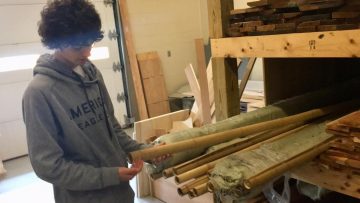 student showing the bamboo shipped to the school from Washington State

Junior Zach Spearly is an avid angler who spends time fishing Spring Creek. A project he’s been involved in during woodworking class since earlier this year is allowing him to make his own fly fishing rod from Tonkin Cane bamboo shipped in from Washington state. Spearly said it may take until next school year to finish, but once done, would like to try it out and then display it for show.

Teacher JP Mayes said the idea to make bamboo fly rods with his class came last year when a physical education teacher suggested it. “Mr. (Dan) Miller was who gave me the idea, and when I looked it up, there was a whole process involved,” Mayes said. “There’s a lot of math, science involved and a lot of precision.” Two students, Spearly and senior Stephen Kutches, are actively working on their projects. Once finished, the rods will be valued at $1,300 to $1,900. Mayes expects four more students to partake in the project next school year. Using a planer forming machine and a router – among other tools – students assemble the fly rods using six equilateral triangle-shaped bamboo pieces that are heated and glued together using adhesive called Unibond 800. One bamboo stick can make up to two seven-foot rods.