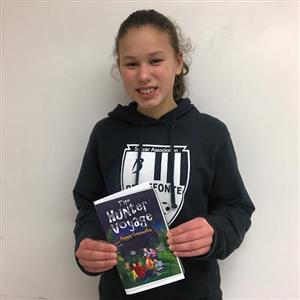 Bellefonte Area Middle School student Annie Cernuska left off her first-published book with a cliffhanger just in case she gets the opportunity to write and publish a sequel that follows the story of “The Hunter Voyage.”

The 12-year-old had the chance in the summer to write “The Hunter Voyage,” classified in the science fiction genre for ages 8- to 15-year-olds. It came after an event she capitalized on last school year as a fifth-grade student at Marion-Walker Elementary School.

Children’s author Stephen Kozan visited students at Marion-Walker where he spoke about what it’s like being a writer, and further explained his journey to create his own publishing company after being turned down by others. That’s when he also presented the Flash Fiction contest that allows students to submit work to Kozan with the potential of being professionally published.

Annie entered the competition, and her passage and idea was named a finalist by Kozan that was later turned into a book printed by Kozan’s Harrisburg-based publishing company, ReadyAimWrite Kids. Throughout the summer, she worked with an editor and illustrator, and the book was printed in early December.

Calling the process “a lot of work,” Annie said her parents, Erin and Matt Cernuska – both teachers in the Bellefonte Area School District – helped her the most along the way. She also said her younger sister, Aalyn, helped create the image that was later illustrated by a professional for the cover of the book.

“At the beginning, it was coming to me naturally, and then it got kind of harder to think of ideas and elaborate on the book,” she said. “It’s been a fun experience, but you can’t expect it all to come naturally, so when you get down to it, you need to think instead of write. It sometimes helps to get out and take a break. We went to Yellowstone, Grand Teton and Glacier (national parks) where I could let my brain take a rest and then come back at it with ideas.”

The book follows the Hunter family in attempt to find a missing family member, while navigating through – and fighting for survival – in an unchartered and unfamiliar area. With characters inspired by family members, Annie said the rest of the book’s plot came on a whim.

“I guess I just thought and wrote about what was special to me and what I recognized, and the rest was just an idea I had,” she said.