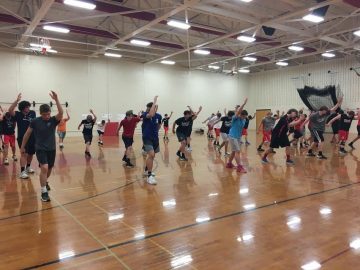 Just two months after winning the District 6 Class AAAA football title, the Red Raiders were back at it working for the 2018 season. Workouts began in early January with the players hitting the weight room three days a week. An average of 40 players dug in and began workouts including weight training, speed and agility training, and core exercises. “We realize how special last season was and we are trying to continue the momentum with workouts,” Head Coach Shanon Manning said. “We try to hit as many phases as we can to make our athletes bigger, stronger and faster. The players did a great job of creating and continuing a culture. The older players led and the younger players fell in line.” Quarterback workouts were held Sundays in February and March, and more speed workouts were done in March and April. The spring routine continued in preparation for the Central Pennsylvania Football Coaches Association combine. “We try to give the players a taste of what college coaches are looking for,” Manning said. “We do some testing before we go to the combine.” Summer workouts began the week after graduation. The team has a camp, seven-on-seven workouts and morning workouts scheduled throughout the summer, which are three days a week for eight weeks.