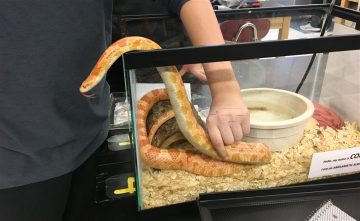 When you walk into science teacher Jill Crisan’s classroom at Bellefonte Area Middle School, there are more than just a bunch of students in class. There are also snakes and rats!
Since the beginning of the year, seventh- and eighth-grade students who participate in an Animal Club at the school have been taking care of the replies that were donated to Crisan. Those students, who aren’t a big fan of the snakes, instead help take care of – and learn more about – the two rats that were also donated to her class. If classwork is completed, then students in Crisan’s other science classes are given what’s called “animal time” on Fridays to interact with the snakes.
“They learn about proper handling and what to be aware of when handling them,” Crisan said.

In total, there are six snakes – all constrictors. Though they have teeth, which help them grasp prey, they do not have fangs and are not venomous. Five are located on student lab tables and one is on a cart. Due to chilly winter temperatures, each snake also has a heat rock in its cage.

Zippy is California kingsnake at 5 feet 7 inches in length and 18 years old. He is black and white in color, and is the owner of the longest skin taped outside Crisan’s classroom door.

Kevin is a Pueblan milk snake. He mimics a poisonous coral snake, which is venomous, by having the same three colors – red, black and yellow – but has different pattern combinations. Kevin is about 8 years old.

Henry, the youngest snake at just less than 2 years old, is a pastel jungle ball python. Crisan said, “what he lacks in length, he makes up in girth.”
Cob, estimated to be 18 or 19 years old, is a regular-pattern corn snake.

Niblet is also a regular-pattern corn snake and is about 17 years old. Although he resembles Cob, he is darker in color. When he was a hatchling, his tail was stepped on, so his it’s much shorter than the others.

Copper is an 8-to-10-year-old amelanistic albino corn snake that is missing the brown melanin in his color pattern, which gives him shades of orange only. His eyes are also pink and orange in color, since he has no melanin to give him the normal eye color of brown.