BEA’s Art of Baking class final exam is a ‘war’ 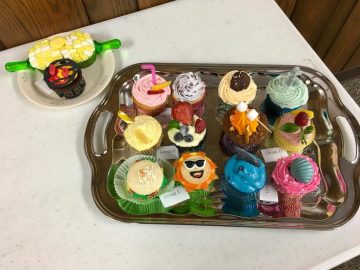 Jennifer Todd’s Art of Baking class at Bald Eagle Area High School requires students to take an end-of-year final that is a little different than the norm. About 20 students are split into groups and participate in local version of the television show, “Cupcake Wars.” Each group must make two types of cupcakes that are rated by six groups of judges on taste, appearance, originality and decoration. The winning team gets bragging rights, but also receives a perfect score on the final baking exam. In this sixth time holding a Cupcake Wars final, 21 students participated this semester in the project. The final allows two days for students to work in their groups to use the computer lab to research recipes that correlate with the theme, “Sweet, Sweet Summertime.” A group member then held a presentation on their research. The groups also had five days to prepare before the final bake and judging May 19. Flavors included lemon lavender, pink lemonade, blueberries and cream, pina colada, berry, toasty vanilla, lemony raspberry twist and pineapple.