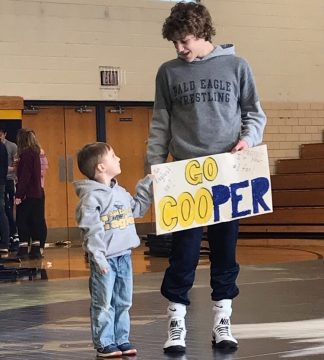 When Cooper Gilham was 4, he started to wrestle. Thirteen years later, the Bald Eagle Area High School sophomore is still doing it – and this time, inspiring a 4-year-old who calls Gilham his favorite wrestler of all time.

Throughout the BEA wrestling season this year, Logan Brooks, 4, could be found in the stands with a sign made especially for Gilham.

“It makes me feel really happy to have someone like him out there,” Gilham, 17, said. “It makes me want to do even better to make them happy and I always just go out there wanting to do my best.”

Gilham had a season record of 32-12 in the 113-pound weight class. He also had the most team points scored, placed third at the Ultimate Warrior and Southwest Regional tournaments, and fifth at the King of the Mountain tournament. According to Coach Ron Guenot, Gilham was also a District 6 runner-up and a Mountain League All-Star.

“I just love it,” Gilham said about his passion for wrestling. “I like being with my team and having fun and practicing hard and going out there every day. I’m glad it’s wearing off on others, and hopefully in a year or two when he’s 5 or 6 he can get out there and roll around on the mat with some other kids and get a grasp on it and get better and do good in his later years.”

Similar to Gilham, Logan has also had a passion for the sport since he was an infant.
“It’s in his blood, I guess,” Logan’s mother Amy Brooks, also a teacher at BEA, said. For Christmas last year, Brooks added that Logan received a singlet and headgear, which he often wears around the house wrestling and pretending he’s like Gilham.

“For whatever reason, he really took a liking to Cooper at the beginning of this season,” she said.
If you ask Logan why he likes Gilham so much, his response is simple: “Because I love him.” And he could be found in the stands with a blue and gold sign that said “Go Cooper.” He was even able to meet the sophomore wrestler after a couple matches this season.

“It was cool getting to meet him,” Gilham said. “He was there at that one match against Shikellamy and I got to see him again at districts and down at states. He was a little shy, but we wrestled a little and he pinned me. … It felt good that someone was there like him watching me.”