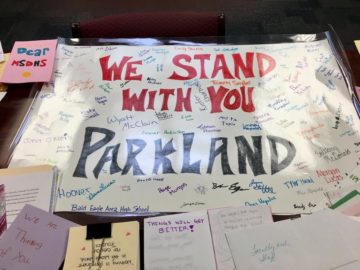 A Bald Eagle Area High School student spearheaded a project to help bring peace to students in Parkland, Florida after a mass shooting on Valentine’s Day at their school, Marjory Stoneman Douglas High School. Junior Bradley Crestani said he wanted the BEA student body to participate in card making for the students impacted by the shooting.

“It started out as a fundraiser idea, but decided sympathy would be better than money,” he said.

But Crestani said he can’t take all the credit for the idea. He found inspiration from some of his peers who have used their platform to give back.

More than 200 cards have been made, in addition to a poster signed by students that said, “We stand with you, Parkland.” Those were sent to the Florida school on March 5. Other cards had messages of thought and prayer and Bible verses.

“It does affect me because I realize these are kids my age,” Crestani said.