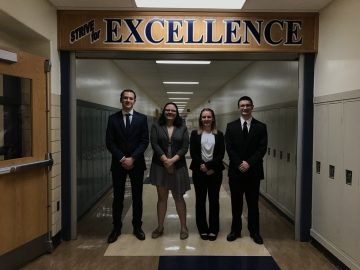 When a group of students from the Bald Eagle Area High School’s Mock Trial team walk into the Centre County Courthouse, there will be nerves. After all, junior member Luke Wilson said the atmosphere is intimidating, but one that can also lend itself to a plethora of learning opportunities.

Mock Trial is exactly what its name suggests – a fake trial held by students who act as lawyers and witnesses in attempt to successfully defend or prosecute a case they have been assigned to. Wilson, along with classmates Peter Van Cise and Taylor Bumgarner will attempt to prove their client innocent in a scenario of alleged malpractice at their next competition.

The jury, made of local attorneys, are there to decide on the verdict and give legal advice to the teams to help them improve in the future. As Wilson said, the atmosphere is “intimidating,” but the group generally leaves the competition learning more than they knew before coming into it.

And when asked what some of the best advice the team received, Bumgarner said, “to be calm and cool under pressure.” She, Wilson and Van Cise are the attorneys in the case, while senior member Rebecca Hoffman is the defendant. Along with staff adviser Janelle Reese, they also work with an attorney adviser who this year is Todd Ciancarelli, also known as Mr. C, of the Mazza Law Group in State College.

“It’s fake to everyone else, but real to us because there is a real judge and jury and we compete against other people who are in this as much as we are,” Bumgarner said. “The criminal justice system has always been really interesting to me. I’m not sure I’m cut out for that line of work, but it’s good to know that kind of stuff when we get older and have to do things like jury duty, we can be prepared for what to expect.