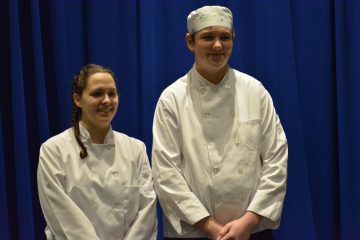 Teams of four and five students from other Culinary schools throughout Pennsylvania competed in a PA ProStart Invitational at the Penn Stater, Wednesday, February 27, 2019. A first for BCCTC, two of Mrs. Camille Stevenson’s students stepped up to the plate to be the smallest team who competed that day. Debbie Barnes, senior from Western Beaver School District and Devin Allision, junior from Blackhawk School District.

Mrs. Stevenson commented, “The ProStart program has challenged these two students both personally and professionally. They have experienced what it feels like to compete with other professionals in their field. I am so proud of them!”

The competition itself, was a little like witnessing an episode of ‘Chopped‘ in which plating occurred within minutes to spare to the amount of time given to the students to prepare their menu. Speaking of the menu, they prepared and served: as an appetizer, Spicy Asian Noodle Soup, the main dish was ​Sugar Glazed Salmon ​with Coconut Sauce; Braised Red Cabbage ​with Raspberry Preserves and a Raspberry Balsamic reduction and for dessert, Lemon Curd Crepe garnished with sweetened Whipped Cream.

Several chefs, restaurant professionals, and Culinary Instructors from various colleges acted as judges for this intense event. All of them continued to comment about BCCTC’s ‘Team of Two’ as all other teams were made up of groups of students, some of which included a ‘Manager’ or ‘Team Captain’ to keep their teams focused and managed their time.

Debbie and Devin made an unforgettable impression to the professionals who judged them that day. Not only did they earn the respect of those observing, but Devin was approached by one of the professionals who said, “If you are ever looking for a job, come to my resort and say, I’m from the ‘Team of Two’ from the 2019 ProStart Invitational because you are hired.”

So now what for the ‘Team of Two’? Debbie plans to continue her Culinary studies at Bidwell Training Center in Pittsburgh. Devin has already begun thinking about his menu for next year’s ProStart Invitational.

To get a sense of the event, please watch this YouTube video.