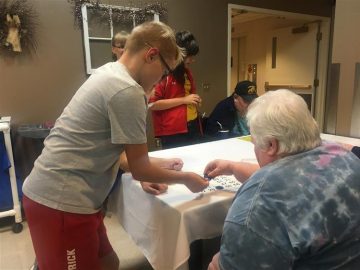 Every time sixth-grade student Logan Rarrick and his partner, a Centre Crest resident, had a number called from their bingo board, he pumped his fist, clapped his hands and yelled “yeah!” in excitement. They got so close to getting bingo in the four rounds played, but never quite won.

That’s OK. Logan said it was still a lot of fun.

He was among 38 students from Bellefonte Area Middle School who stopped by Centre Crest in late September on a field trip to visit residents. It’s something students regularly do as an activity with the Chain Reaction Club – a student organization, led by co-advisers and teachers Samantha Hubley and Jennifer Kerr, aimed at promoting positivity in their school and community. It was created with inspiration from Rachel’s Challenge made in memory of Rachel Joy Scott, the first student killed in the Columbine High School shooting and known for her enthusiasm in spreading kindness.

Kerr said this was the seventh year the program has participated in community events with Centre Crest, a Bellefonte-based nursing home and rehabilitation center.

Bobbie Salvaterra, the facility’s director of therapeutic recreation, added that the residents “love” when the students stop by.

“It’s a great partnership we have with the school,” she said.

Students spent time mingling with residents and then teamed up in pairs to play games such as bingo. Students from other schools within Bellefonte Area School District also take time throughout the school year to visit with residents.

Members of the Chain Reaction Club also participate in other activities such as organizing food drives for local food banks, supporting animal shelters through various efforts, distributing crafts to Bellefonte residents living near the middle school, holding blood drives to benefit the American Red Cross, participating in the Buddy Program with students in the life skills classes and more.