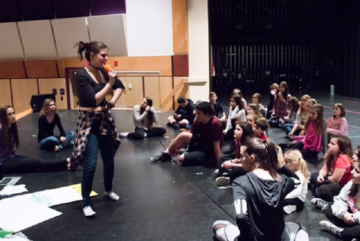 In January, Baldwin High School junior Mikayla Davic held her fourth annual self-produced musical, Misfits. Over its three-night run, Misfits raised $13,010 for Make-A-Wish — helping the young philanthropic producer close in on her goal of $50,000 by her senior year. Attendance at Davic’s musicals has grown to nearly 2,000 in attendance this year. Davic’s goal for this year’s musical is raising $15,000, leaving a donation link open through the end of February (see http://mikswish.weebly.com/ to donate). A local Duck Donuts has made Mik’s Wish their charity of choice for the month of January, donating a portion of their proceeds to the campaign. You can read more about this year’s musical and the wishes Mikayla has helped to make possible in the Pittsburgh Post-Gazette