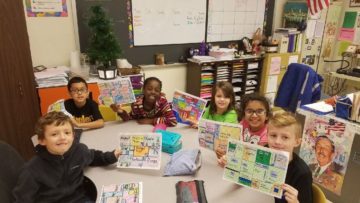 Third-grade students at Paynter have been working hard to learn how to calculate the area and perimeter of a rectangle. To spice things up and connect learning to real life, students completed a variety of projects that required creative problem-solving math skills. Some students used Legos to build regular and irregular rectangles and then found the area and perimeter of the shapes they created, which “combined learning and fun, which is better than just paper and pencil,” said third-grader Jeff Stipetic. Laila Ruvolu explained that, “To find the area, you only needed to multiply the Lego studs going across by down—just like in arrays!” Other students designed a zoo map and then computed the area and perimeter of each region in their zoo. Student Bronika Timsina said, “It was fun making my own zoo. I gave each animal their own space. I added up all the sides to figure out what the perimeter was for each animal and then decided who had the greatest space.” In the end, all the third-graders became area and perimeter experts and had fun doing it!