Kindergarten students participate in Christmas Around the World lesson 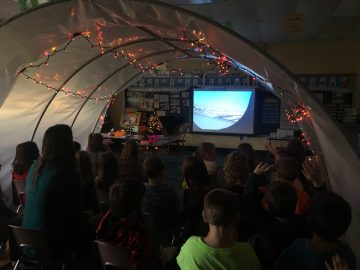 “Are we traveling today?” That’s what Wingate Elementary School kindergarten teacher Kim Hearn often heard from her students just about every day this holiday season. That’s because her class participated in a project called “Christmas around the world” that allowed her students to learn about holiday traditions celebrated in different countries. Traveling on a simulated airliner called Eagle Air, kindergarteners in took pretend trips to different countries. As students entered their classrooms through the Soaring Eagle Terminal, they received a ticket at the gate valid for a one-stop trip to another country. Students “visited” Germany, Italy, England, France and the Netherlands. During their trip to the Netherlands, students learned about the Dutch tradition of Sinterklaas – a figure based on St. Nick who is said to leave gifts for children who leave their shoes out by a fireplace. They also traveled to Israel to learn about how residents there celebrate.