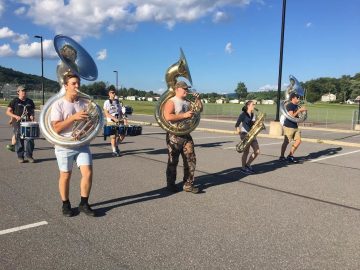 For many Bald Eagle Area High School students, a Fourth of July event was the biggest band activity of their lives. After an application was submitted, the BEA marching band was selected from among 120 groups to be a part of the National Independence Day Parade in Washington, D.C. “I’ve been in marching band since eighth grade and this is probably the biggest parade I’ve ever been in and probably one of the more important (that) BEA has ever played in,” said Jacob Michael, who graduated in June and plays the sousaphone. “It’s a pretty big deal, so we take a lot of pride in it.” Band Director Kellie Long said the students practiced for more than a month. In 2012, the band also marched in this same parade. This year, the band was placed 74th in the lineup just behind Miss USA, who will be on a western-themed float, and another group carrying 25 American flags. “It is an honor to have my band selected to represent Bald Eagle Area School District, our community and the state of Pennsylvania in this parade,” she said. The parade started at 11:45 a.m. July 4. By 5 p.m., a video of the entire parade was available on this link: https://www.youtube.com/channel/UCTpAvFXTnftJoh8F-bITjww.