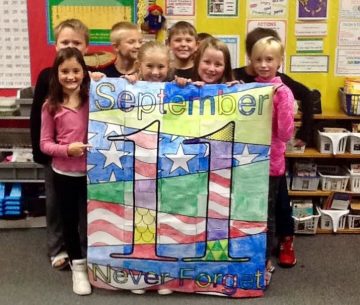 Students from around the Bald Eagle Area School District learned about 9/11 this year on the 17th anniversary of the incident. At Mountaintop Area Elementary School, students in Sue Pratt’s third-grade class participated in a series of activities that helped teach them about 9/11. Pratt said that included reading “September 12th: We Knew Everything Would Be All Right” — a book written by first-grade students and their teacher at a school in Missouri; watching a video called, “Patriot Day” that outlined the details and showed pictures of what happened on Sept. 11, 2001; and also reviewing photos of memorials built to remember the people who died in the attacks, including the Shanksville, Somerset Co. memorial site of the United Flight 93 crash. Perhaps the most important topic the class discussed was the heroes who helped in so many ways, and read the “Fireboat: The Heroic Adventures of the John J. Harvey.” They then ended the lesson with a collaborative art project comprised of 30 pieces colored by students.