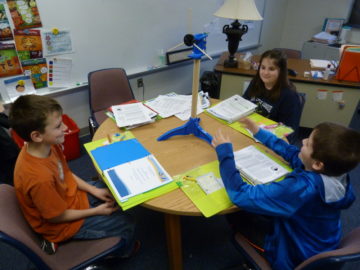 Three Howard Elementary School fifth-grade students, Matthew English, Wyatt Kowalczyk and Lilly Nyman, are working with retired Bald Eagle Area administrator Marsha Sackash to create a team plan for the upcoming KidWind Challenge, an annual statewide competition in which teams create a fully functional wind turbine and generator. Last year’s Howard Elementary team was the youngest to place in the top 10 during the competition, which in 2018 will be held at Penn State on March 28. This year’s team is drawing inspiration from earlier wind turbines such as a Vernier wind turbine and the 2017 team’s model. The students also will be using recyclable parts to build their competition entry. Students began the research process in January and creative process in February, before testing the design prior to competition. Teams will be judged on a series of categories that include design, power and presentation.