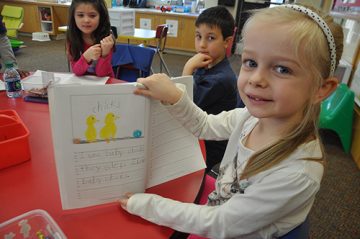 The students also wrote about the chicks in their journals.

If the groundhog’s prediction and a couple February days with temperatures in the 60s haven’t convinced you that spring is just around the corner, the true harbingers of spring have arrived at Ridge Park Elementary School — baby chicks in the kindergarten classrooms.

“I really like that the kids get hands-on experience in learning about the lifecycle of the chicks,” said kindergarten teacher Tara Homer. “It’s one of their most memorable experiences in kindergarten.”

Farmer Tom from Quiver Farms visited the kindergarten classrooms with a live hen and rooster to show the students what the chicks will look like when they get older. He left behind a couple incubators full of eggs that hatched into chicks over the course of a week. The children took care of the newborns, showing them where to get food and water, and occasionally have a chance to see them outside of their heated box.

“I was surprised that you get to hold them,” said Jaylan Santiago, a kindergartner who compared the chicks to his friend’s pet. “The body is soft and round like Ava’s cat, and the feet are hard.”

While the chicks are part of the kindergarten science unit about living and nonliving things, the experience is also something they write about during English Language Arts.

“My favorite thing about the chicks is that they’re cute and soft,” said kindergartner Isla Dolan, who wrote about how some of the chicks hatched on her birthday.

Since the chicks will lose their fluff, Farmer Tom has allowed the teachers at Ridge Park Elementary to put a little color on the chicks to indicate a special chick for each team. Mrs. Homer’s class is the purple team, and they named their chick, “Fluffy.”