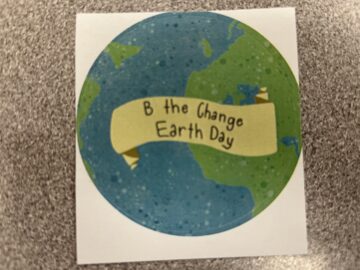 A goal of “B the Change” at Bellefonte Area High School is education through literacy by working with school librarian Naomi Rupert. Leading the charge in monthly library themes, students from the club develop themes and posters, and Rupert features books in the library that align with those topics. So far, it has focused on Black History Month, Sexual Assault Awareness Month and Women’s History Month, where books such as those written by women or persons of color were featured and displayed, but not highlighted for anything more than as a resource for students, faculty and staff that want to learn more about the various subjects. “This has been a good collaboration and I hope that it can continue over the years,” Rupert said.

Other topics the club is working on also include recognition of teachers during Teacher Appreciation Week from May 2-6; members of the military for Armed Forces Day, celebrated annually on the third Saturday in May; and the transgender community during Trans Day of Visibility on May 31. With Earth Day on April 22, students involved in the club have been working to spread awareness and education about climate change and environmental stewardship with other students passionate or willing to learn more about the issue.

Student President Cecilia Mazzocco, a junior, said posts have been made on the club’s Instagram account as an initial way to spread awareness. Posts include information and references from sources such as NASA, National Geographic and the United Nations. That led to advocacy at school the week of Earth Day with daily morning announcements and stickers passed out to those who wanted any – and which were designed by junior Reese Walters.

“More than anything, it’s about spreading education about different issues regarding climate change, and regarding the earth and natural ecosystems and habitats, pollution, deforestation and how that fits into Earth Day itself,” Mazzocco said. “The education behind it is so important because I feel like a lot of people don’t know that much about it. I didn’t at first and then realized it impacts us all.”

Mazzocco’s advocacy stems from fourth-grade when she did a project as a requirement for her gifted individual education plan. “I got really interested in climate change and how, as a society, we can combat that,” she said. “I’ve always been really close with animals and in my enrichment project, I talked about cosmetic testing on animals. I became passionate about it and from there it trickled into other things.”

Calling it a “learning moment,” Mazzocco said she now does what she can to provide resources for the topic and added that it was the inspiration for why she wanted to create B the Change last school year, so students, like herself, have an outlet for advocacy and education about things students are passionate about. “It’s the little steps that help,” she said. “Environmentalism isn’t perfect – it’s not an all-or-nothing approach, and no one is going to change the world overnight, but little habits like recycling or finding an alternative to everyday things, can help.”

Students from B the Change are also working on planning a school-approved demonstration in regard to climate change advocacy and education, which would be held later next month after school is dismissed.